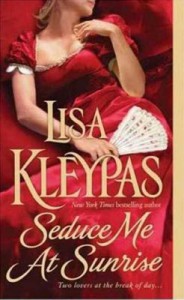 Kev and Win made me cry at times, there is so much longing, so much love and passion between these two.

Kev was rescued from the forest when he was a young boy after his tribe of gypsies, or Rom as they called themselves, was brutalize and killed for having set up camp illegally on English Lord's land. He is an angry and mistrustful boy who only finds comfort in young Win's voice and her reading. They fall deeply in love but because of his Gypsie ancestry Kev never acts on it because Win would be forever ostracized for being the wife of a dirty Gypsie as they are viewed in society.The years go by and after the untimely death of the Hathaway's parents, scarlet fever sweeps through the village they are living in and Win falls ill. She survives the illness but is left weakened and barely more than an invalid that gets winded even when she tries to walk or go up a set of stairs. Kev cares for her with devotion waiting on her on hand and foot but after her eldest sister, Amelia, marries, she is sent to a clinic in France in the hopes that she will recover her strength. Their separation is heart wrenching, Kev is so emotionally attached to Win but has denied his feelings for so many years that Win, in an desperate effort for an emotional farewell, plainly speaks of their feelings but Kev refuses her and she leaves heartbroken.

After nearly two years in France, Win returns all healed, she can now go up and down stairs without getting winded, she has recover her previous health and she wants to desperately see Kev. She is still hurt with him because while she wrote to him constantly he only send her the one letter and she wants to confront him about it. After meeting her family she finds out where Kev is staying and goes up to see him and they both find that the blood still runs hot between them. However, Kev refuses to acknowledge his feelings for Win because he says he has nothing but grief and pain to give.

This ignites a series or events of push and pull between Win and Kev as he fights his feelings and she fights to get what she wants, marriage to Kev. Kleypas writes the longing and love between these with so much raw emotion. I found myself tearing up at their emotional goodbye and their reunion, it is so clear that they are in love that in Win Kev finds peace.

I am ashamed to admit that while I had loosely known of the discrimination that Gypsies faced, I had never truly known the extent of the racism that unfortunately still persist to this day. I don't have enough knowledge to say if Kleypas wrote all the extent of the terrible injustices that Romani people faced but at least it reads right. I find that she snuck into the narrative little cultural tidbits of Romani culture and they added many layers to the story for sure.

The ending is deeply moving and satisfying as their relationship, so long denied, is realized. I had to wipe a tear and that is saying a lot.