Tempt Me At Twilight by Lisa Kleypa 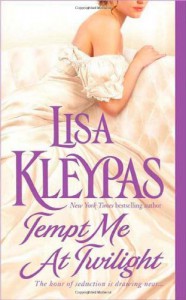 More romance crack brought to you by Kleypas and her keyboard.

Seriously, I am amazed at this authoress ability to have one formula and come up with more than a dozen different ways to write it differently.

Poppy is in love with another man when she meets Harry purely by accident as she tries to retrieved her family's pet ferret and Harry becomes so taken with her that he manipulates events so she would marry him. Harry is not prince charming riding on a white horse, he is the veritable villain who practically steals Poppy away from the man she thinks herself in love with.

It is all very dramatic as he exposes her relationship with Michael to his disapproving father who thinks himself, and his son, the creme of the creme and everybody else without a tittle, or proper bloodlines, less than dirt. Michael, cowed by his father's threat to disinherit him, cuts off his relationship with Poppy and despite her families reassurances that if he truly loves Poppy they will help them financially he breaks up with her. Poppy is heartbroken as Michael had promised her that in time they would marry.

Whispers are rampant, Poppy Hathaway was cast off by Michael Banying because his father disapproved and, in a moment in time when a woman's reputation was a veritable house of cards that the merest whisper of scandal could topple over, Poppy is told by her family and brother that she must put on a show on the last ball of the season and prove the whispers and gossip wrong. Poppy is distraught, but if she wishes to eventually marry, as all young women should do lest they stay spinsters, she must attend the ball and pretend, this is when Harry swoops in for the kill. He wants Poppy desperately after having met and spoken with her, she is everything he is not and he wants her to smile at him and give him all her attention.

Harry is a man used to getting anything and everything he wants no matter the risk or consequences and he wants Poppy. He tries every single underhanded tactic to seduce and marry her without realizing that he is in love with her. He is a hard man having been denied all his childhood and early adult life love and affection he doesn't understand his feelings, he just knows he wants Poppy and to this end he compromises her by kissing her in a balcony where they are caught by some guest.

You can just imagine the uproar, no respectable young woman was ever seen in the presence of a gentleman without a chaperon and much less kissing him. There is nothing to be done, Poppy knows she has to marry Harry even when her family tells her that it would be okay, they can just whisk her away to the family state in the country. On the day of the wedding Michael shows up repentant and angry as he has just discovered that Harry had a hand in separating him from Poppy. He dramatically accuses Harry and they come to blows over it and this is where everything goes to hell because while Poppy marries Harry she is hurt by his manipulations of events.

You see Harry just doesn't believe anybody can love him for himself so he lies, cheats and manipulates to get his way. He repeatedly tries to bribe Poppy for her affections and to earn her favours in bed because he simply doesn't know another way to ingratiate himself to her. His constant train of thought is '"How can I buy Poppy's affections?" and it is pitiful because he is such a rich man and so powerful but he is really empty when it comes to love. I found this really profound because I have met many men like Harry in many walks of life.

The thing with Poppy is that while she is hurt by Harry's manipulative ways she can see right through him, she stand up to Harry and calls on him when he does things wrong and finds and ever present attraction to him. Their relationship develops slowly, layer by layer as Harry thaws out and realizes that he is in love with Poppy and the thought terrifies him beyond all measure so he self sabotages, running away from Poppy in the middle of the night after making love.

Poppy is hurt but she refuses to stick around and wait Harry out until he gets his act together so she packs her bags and leaves him for her family state. This is the best thing she could possibly do because it sets Harry into gear, he grows beyond angry when he comes back home and finds her gone, Poppy will not leave him!

This separation brings them closer because Harry is desperate to have Poppy back and it forces him to open up emotionally. I love the way Kleypas writes their relationship, I enjoyed every minute of it because, while yes, Harry manipulated everything he merely brought about to fruition what would have eventually happened because Michael never would of had the courage to go against his father and marry Poppy and she would have been left around waiting forever but Harry had the courage and drive to sweep her away.

Harry is the perfect anti-hero in this story and we fall in love with him because of how flaw he is, not because of his virtues but because he really is just a man. I liked Poppy a lot, she was a brave young woman that did no go to pieces at the sight of adversity but made the best of her situations no matter what they where. I found myself rooting for them to put aside their differences and finally admit to being in love.