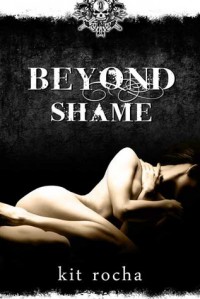 Yes, that's what this book is, gangs and sex and being "free" at least under some dumb illusions.

So, the MC Noelle got kicked out of Eden because she wanted to drink and have sex. We get no reasoning why Eden forbids these very benign human vices, however, if one squints you start to think that really only the religious zealots of the American bible belt survive the solar storms that devastated earth and they built a community... and thus you get shit like this.

So yeah, she gets kicked out and by luck she meets some guy who saves her from a rapist and when she faints he throws her over his shoulder and carries her off to his den of sin and blasphemy where everybody drinks and sucks dick.

Well, okay only the women suck dick, the men protect them and shit but really all the women are subservient to the gang leader unless they are 'collared" which is this debauch societies term for marriage. But you know, since they are cool and edgy and heathens and they will burn in hell they call it "collared" which to be honest is exactly what happens. The women will get approach by some powerful gang member and they will get their neck tattoo with a collar if they accept the protection of said righteous... erm, powerful gang member. Afterward, they are subservient to said man which goes something like:

"Is it safe out there, honey bunches, I want to go to the market to buy you shit?"

"Nope, its not safe for you because women can't shoot guns or think up serious strategy or learned computer systems and hack into weapons of mass destruction, so don't go out there bitch, suck my dick and make me a sandwich."

Seriously, the women get assigned some sort of productive work, like bar tending or strip pole dancing and if they have any brains they might get charged with making liquor and whiskey but none of them know how to shoot a gun or fight or anything because that's what the men are for and god forbid the women learn how to properly defend themselves.

The women have zero vote on their safety because if they aren't collared, and shit gets hot on the street, they are subservient to the gang leader who decides if they go out or not, because its for their protection. There is no way they can teach the weak females to carry weapons and learn how to fight and shit, nooo, they just tell them to stay put inside or go out with one of the superior males so they can buy lube and sandwich making stuff. You know, for their safety! Their right to speak or take matters into their own hands doesn't matter, but they do have an option of whether or not they want to suck dick, they aren't complete monsters after all.

That's about the extent of what I know about the relationships in the book. Seriously, does Dallas talk about Lex's feelings or what he knows about her emotionally? Nope, we only know that she can swallow dick like no other. The author tried to make their relationship sound deep and trouble and tumultuous but all I saw was a woman trying her best to make a man noticed other things about her than how well she sucks his dick, and a man who just can't commit and doesn't want to acknowledge his feelings. Maybe I was too stupid to get anything else.

Now Noelle, the MC, and Jasper... well, they supposedly have this  deep

connection and shit but all I see is that he wants to bone her and she wants to desperately suck his dick. Which is, you know, fine and all but in a book sometimes you need emotional depth. I wasn't very impress with the sex and Lex and Noelle had more connection than they had with their two great loves.

That being said, I think I will pick another series by this author because her prose is good she just needs to grow in some places and write better sex scenes with the appropriate lube in them.